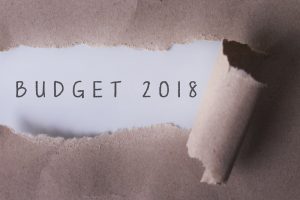 With budget 2018 just around the corner we look forward with great hope to minister for finance Paschal Donohoe telling us how much of our paycheck we will get to keep. We can’t say anything definitive regarding the budget until it is announced in the coming weeks but we will be hampered by an estimated 170 million euro already promised to current financial measures.

Much was made of the mounting pressure on the middle income earners last year so we stand with bated breath on early indications from Mr Donohoe at a speech to the Kennedy Summer School in early September that a possible increase in PAYE tax credit could be a possibility this year. It is speculated that Minister Donohoe may consider abolishing the PAYE tax credit for those earning over €123,000 much like the UK in order to finance the increased tax credit for the squeezed ‘middle income earners’.

Taoiseach Leo Varadkar has eluded to the possibility of scope for income tax cuts this year along with reductions for the universal social charge which will be welcome news should it prove true. USC has been a widely criticized proponent in previous budgets and while abolishing it entirely is extremely unlikely, it is a possibility that it will see some cuts. The Taoiseach has announced that he would like to see less people hitting the higher rate of income tax which is a great indicator. However, he did go on to say that tax payers should not raise their hopes too high and indicated that tax burdens are unlikely to fall as sharply as they rose during austerity.

Why wait for the budget to save money. At Taxpro we are specialists as claiming back overpaid tax and most households don’t even realize they can claim back tax. Our average return is €885 and if we claim back less than €100 your return is done for free. visit www.taxpro.ie/enquiry to enquire about your return. And remember, No return = No fee with Taxpro.ie

If you have any questions or would like a callback to clarify if you are eligible for a tax refund: